AlumoFluor is an inorganic compound in powdered form and is classified as a top – quality product containing min. 96% of active substance.

AlumoFluor is low-density aluminium fluoride. It is produced using hexafluorosilicic acid, the product extracted during phosphoric acid production process, and neutralizing it with aluminium hydroxide. 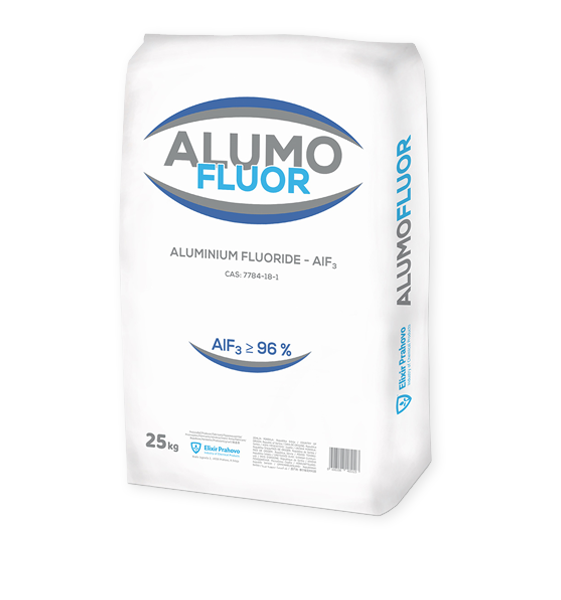 It is mainly used as a catalyst for the production of primary Aluminium metal.

Aluminium fluoride essentially lowers the melting point of the alumina feed. Together with cryolite, it increases the electrolytes conductivity of the solution, reducing the electric power consumption which leads to the reduction of production costs of aluminium.

Depending on the quality of AIF3 as essential catalyst, the quantity of 10-25kg is required for production of 1Mt of Aluminium.

AlumoFluor is a low-density aluminium fluoride. It is produced druing phosphoric acid production process where hexafluorosilicic acid is subsequently neutralized with aluminium hydroxide.

AlumoFluor is classified as a top – quality product containing min. 96% of active substance.

Not classified as hazardous according to the EU regulations

Bulk, in big bags or in smaller paper bags

Stored indoors in a dry and cool place with ventilation

Not classified as dangerous according to transport regulations

AlumoFluor is manufactured in accordance with the Green Tech principles:

As a raw material, we use a by-product of chemical industry, the reuse of which creates new value and protects the environment

The production of AlumoFluor officially started in mid-February 2021 .

The state-of-the-art German equipment that meets all the requirements of modern industrial production is used in the production process. The manufacture of AlumoFluor is organised in an upgraded AIF3 plant that used to operate from 1982 to 1999.

Prahovo is located on the bank of the river Danube, right on the threepoint border of Serbia, Romania and Bulgaria.

Transhipment capacity of Prahovo Port is over a million and a half tons per annum.

There is a well-developed rail infrastructure with a number of industrial tracks within the port, and the whole existing complex is connected to the Serbian Railways system and the international rail network.